In February 2020, the National American Indian and Alaska Native ATTC hosted a regional technical assistance meeting in Oklahoma City for recipients of the Tribal Opioid Response grant. It was similar to meetings we had held in other regions. Doctors, nurses, grant managers, counselors, and other health professionals from 15 tribal health clinics in the surrounding states came together in a hotel conference room to talk about a common sickness in their comm­­unities: opioid use disorder.

We began each of the three days normally, that is, in a good way. Each morning, a tribal elder native to the region welcomed participants with a brief invocation, or song, or smudge. We explained the services we offered, along with our partners at the Association of American Indian Physicians, whose headquarters was just down the street. Speakers were scheduled over the two and a half days to cover topics ranging from presentations on stigma to telehealth demonstrations, but most of the time was reserved for the attendees to speak and share their experiences.

Hosting this meeting as a non-native, it was crucial to consider the culture of the communities and the indigenous strategies that they have developed over generations to address communal issues. Acting with cultural humility establishes trust and buy-in from the community and lets them factor in their existing strategies. It’s also important to engage for a long period. Providing TA means making a commitment and thinking about strategies that will work for the long term. Community-based, tribally-based participatory programming is essential to actually affecting change that will last. Our role is not to direct tribes how to act of what to do, but to meet them where they are at, provide them with the best, most up-to-date knowledge that we can and work with them to find solutions relevant to their people and that reflect their wealth of indigenous knowledge.

After brief introductions, representatives began sharing their stories. As we started, the magnitude of the problem facing us was palpable. Each person understood the threat that opioid use disorder posed to their community, and this showed in their presentations. This had touched their families and neighbors, and threatened to cut the bonds that united them as a tribe. They explained the goals they had for their communities, as well as the barriers: lack of community buy-in, stigma towards medication-assisted treatment (MAT), staff turnover and burnout. But as these representatives shared their experiences, their tone became more confident and enthusiastic. As these professionals explained how they thought they had been facing these problems alone, they saw how many others were experiencing the same thing.

One attendee m­entioned their difficulty filling beds in their treatment facilities. Another immediately asked if they could send patients from their neighboring state, and they traded information. One attendee from an Oklahoma tribe explained how they developed a prevention program for native youth by forming traditional stickball leagues. Another explained how patients were denied services because they didn’t have official identification, so they partnered with local recovery centers to hold “ID Expos,” where donated funds would be used to pay for issuing acceptable documentation. They explained that in 18 months they created over 1000 IDs, prompting a flurry of questions from the audience.

As one representative put it: “This training lacked the underlying fear of failure, desire to ‘one-up’ everyone, pride, tendency to exaggerate credentials and success of programs, and relationship hesitancy. It was so refreshing to hear humility, openness about struggle and challenges, see the desire to learn new info and personal engagement between participants.”

Often when presented with overwhelming challenges, it is easy to become discouraged and give up. But even in modern times, tribes can gain strength from a resource they have relied on for generations: each other. The opposite of addiction is not sobriety, but connection.

To see a collection of TOR resources that our ATTC has prepared, please visit our website at: https://attcnetwork.org/centers/national-american-indian-and-alaska-native-attc/tor-resource-page.

For more information on our center’s programs and events, visit https://attcnetwork.org/centers/national-american-indian-and-alaska-native-attc/home or email Jeff Ledolter at jeff-ledolter@uiowa.edu.

Sid Schnoll, one of the founders of AMERSA, discusses with Paula Lum the origin of the organization out of the Career Teacher Program of the... 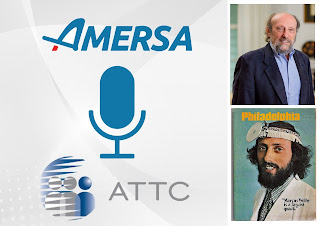